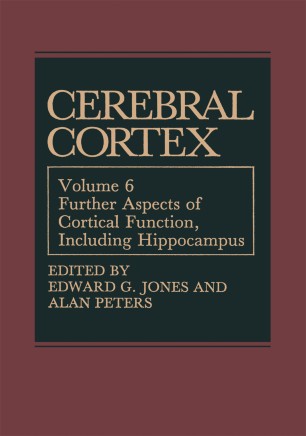 Volume 6 of Cerebral Cortex is in some respects a continuation of Volume 2, which dealt with the functional aspects of cortical neurons from the physiological and pharmacological points of view. In the current volume, chapters are devoted to the catecholamines, which for a number of reasons were not represented in the earlier volume, and to acetylcholine and the neuropeptides, about which much new information has recently appeared. Volume 6 deals in part with the structure and function of cholinergic and catecholaminergic neuronal systems in the cerebral cortex and with new aspects of the cortical peptidergic neurons, notably the almost universal propensity of the known cortical peptides for being colocalized with classical transmitters and with one another. It thus completes our coverage of the major cortical neuro­ transmitter and neuromodulatory systems. Other chapters in this volume deal with data pertaining to the proportions of different types of cells and synapses in the neocortex and the physiology of the cortical neuroglial cells. These latter are topics that rarely receive separate treatment and the current chapters serve again to continue discussions of subjects that were introduced in Volume 2. The previous volumes have all been devoted to the neocortex but the present one introduces the subject of the archicortex. To this end, separate chapters are devoted to the physiology and anatomy of the hippocampal formation.