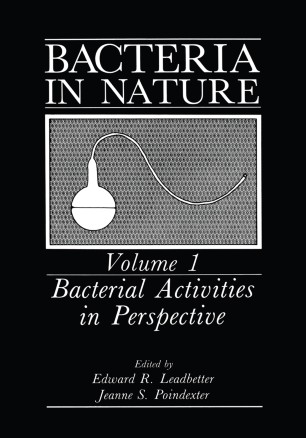 Part of the Bacteria in Nature book series (BANA, volume 1)

Any branch of biology depends for its progress on the development of new concepts and to a lesser, but sometimes crucial, extent on the elimination of erroneous notions. Understanding the roles of bacteria required first the observation that such minute creatures existed, and subsequently the exper­ imental demonstrations that their presence was necessary for the occurrence of particular phenomena. In this first volume, the authors review the development of scientific understanding of the role of microbes as agents of diverse natural processes. Notably absent is a separate review of the history of microbes as agents of disease, a his tory available in many other publications. Regrettably absent is a review of the his tory of microbes as agents of inorganic transformations, a serious omission that resulted from the illness of the prospective author late in the preparation of this volume. The topic will of course be treated in later volumes, although not predominantly in a historical manner. Otherwise, the emphasis in this volume is on the history of understanding interrelationships between modes of bacterial existence and the inanimate environment. These relationships were established long be fore multicellular, differentiated or­ ganisms appeared as potential microbial habitats, and their recognition and elucidation contributed greatly to the widened appreciation of bacterial di­ versity and the importance of these simpler creatures to the physiochemical conditions of the biosphere.