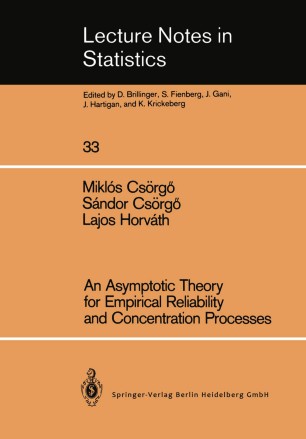 An Asymptotic Theory for Empirical Reliability and Concentration Processes

Mik16s Cs6rgO and David M. Mason initiated their collaboration on the topics of this book while attending the CBMS-NSF Regional Confer­ ence at Texas A & M University in 1981. Independently of them, Sandor Cs6rgO and Lajos Horv~th have begun their work on this subject at Szeged University. The idea of writing a monograph together was born when the four of us met in the Conference on Limit Theorems in Probability and Statistics, Veszpr~m 1982. This collaboration resulted in No. 2 of Technical Report Series of the Laboratory for Research in Statistics and Probability of Carleton University and University of Ottawa, 1983. Afterwards David M. Mason has decided to withdraw from this project. The authors wish to thank him for his contributions. In particular, he has called our attention to the reverse martingale property of the empirical process together with the associated Birnbaum-Marshall inequality (cf.,the proofs of Lemmas 2.4 and 3.2) and to the Hardy inequality (cf. the proof of part (iv) of Theorem 4.1). These and several other related remarks helped us push down the 2 moment condition to EX < 00 in all our weak approximation theorems.