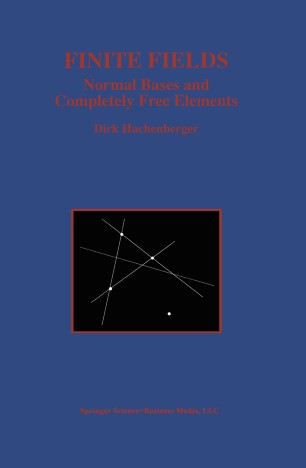 Part of the The Springer International Series in Engineering and Computer Science book series (SECS, volume 390)

Finite Fields are fundamental structures of Discrete Mathematics. They serve as basic data structures in pure disciplines like Finite Geometries and Combinatorics, and also have aroused much interest in applied disciplines like Coding Theory and Cryptography. A look at the topics of the proceed­ ings volume of the Third International Conference on Finite Fields and Their Applications (Glasgow, 1995) (see [18]), or at the list of references in I. E. Shparlinski's book [47] (a recent extensive survey on the Theory of Finite Fields with particular emphasis on computational aspects), shows that the area of Finite Fields goes through a tremendous development. The central topic of the present text is the famous Normal Basis Theo­ rem, a classical result from field theory, stating that in every finite dimen­ sional Galois extension E over F there exists an element w whose conjugates under the Galois group of E over F form an F-basis of E (i. e. , a normal basis of E over F; w is called free in E over F). For finite fields, the Nor­ mal Basis Theorem has first been proved by K. Hensel [19] in 1888. Since normal bases in finite fields in the last two decades have been proved to be very useful for doing arithmetic computations, at present, the algorithmic and explicit construction of (particular) such bases has become one of the major research topics in Finite Field Theory.