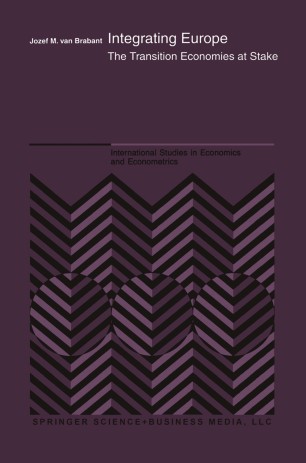 The Transition Economies at Stake

Part of the International Studies in Economics and Econometrics book series (ISEE, volume 37)

Bringing the eastern European economies in transition (defined more precisely in the Introduction) under the economic, political, and secu­ rity umbrella of the European Union (ED) has been an ambition of many of these countries from the very start of the so-called annus mirabilis in 1989. The road to gratification of this aspiration since then has been rather bumpy, however one wants to look at recent events. Indeed, since 1989 the relationship between the EU and the economies in transition has been ebbing and flowing with the evolution of two main strands of policy stances in the EU. One has been deep skepticism about bringing these countries into the Union at all in any foreseeable future. This in spite of the fact that, after long hesitation, in mid 1993 the EU Member States committed themselves eventually to explore accession with selected transition economies, as well as Cyprus and Malta. The other has been their evolving attitude toward their own integration endeavors. Hence the dilemmas, in the EU's parlance, of the "deepening versus widening" conundrum. That indeed constitutes the paramount issue addressed in the present investigation.