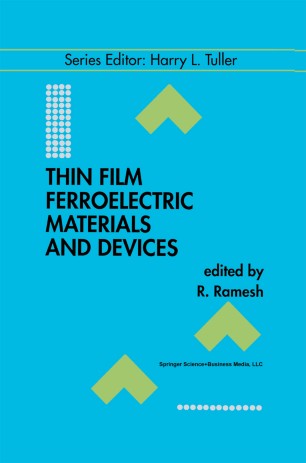 The past five years have witnessed some dramatic developments in the general area of ferroelectric thin films materials and devices. Ferroelectrics are not new materials by any stretch ofimagination. Indeed, they have been known since the early partofthis century and popular ferroelectric materials such as Barium Titanate have been in use since the second world war. In the late sixties and seventies, a considerable amountofresearch and development effort was made to create a solid state nonvolatile memory using ferroelectrics in a vary simple matrix-addressed scheme. These attempts failed primarily due to problems associated with either the materials ordue to device architectures. The early eighties saw the advent of new materials processing approaches, such as sol-gel processing, that enabled researchers to fabricate sub-micron thin films of ferroelectric materials on a silicon substrate. These pioneering developments signaled the onsetofa revival in the areaofferroelectric thin films, especially ferroelectric nonvolatile memories. Research and development effort in ferroelectric materials and devices has now hit a feverish pitch, Many university laboratories, national laboratories and advanced R&D laboratories oflarge IC manufacturers are deeply involved in the pursuit of ferroelectric device technologies. Many companies worldwide are investing considerable manpower and resources into ferroelectric technologies. Some have already announced products ranging from embedded memories in micro­ controllers, low density stand-alone memories, microwave circuit elements, andrf identification tags. There is now considerable optimism that ferroelectric devices andproducts will occupy a significant market-share in the new millennium.