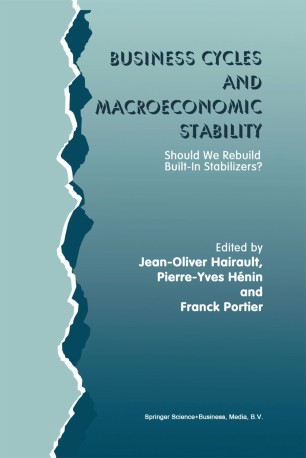 Should We Rebuild Built-in Stabilizers?

Setting the issue "Most economists consider the marked increase in automatic stabilizers a highly favorable development with respect to maintenance of economic stability". Besides the rare privilege of having being signed by both Milton Friedman and Paul Samuelson (Depres,Friedman, Hart, Samuelson, and Wallace [1950]), among others, this sentence expressed as soon as 1950 the consensus view on the stabilizing effect of fiscal rules governing tax revenue and public expendi­ tures and transfers. This positive ex ante assessment will have been confirmed ex post as part of the explanation for post war stabilization (Burns [1960], de Long and Summers [1986], Moore and Zarnovitz [1986]). However, it becomes disputed in both its positive and normative aspects. Many institutional changes since the eighties point at curbing back the transfer mechanisms underlying automatic stabilizers, and legal restraints on deficits such as the US balanced budget amendment or the European Maastricht criteria would involve serious risks for the future of stabilizers. Under such rules "the government would become, almost inevitally, a destabilizer rather than a stabilizer" said Joseph Stiglitz, quoted by the New York Times (April 1995)). "Built-in stabilizers are automatic fiscal adjustments that reduce the national income multiplier and thus cushion the effects of changes in autonomous spend­ ing on the level of income" (Pechman [1987]). Early analyses of the automatic fiscal stabilizers include the contributions of A. G. Hart [1945], R. Musgrave and M. Miller (1948) and E. C. Brown (1955).