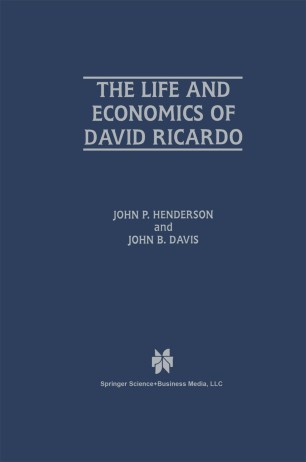 The Life and Economics of David Ricardo

John P. Henderson's The Life and Economics of David Ricardo represents the first comprehensive personal and intellectual biography of the brilliant and influential British economist. Employing the talents of both a biographer and an economist, the author examines Ricardo's early years, his Sephardic origins and his employment in the London financial markets, as well as his later work on money and banking, international trade, economic instability and the theory of rent and value. Henderson also provides a thorough investigation of Ricardo's relationships with Thomas Robert Malthus and other classical economists.
The Life and Economics of David Ricardo will be of interest not only to historians of economic thought and students of economics, but also to any economist working in the Ricardian or Classical Political Economy tradition.