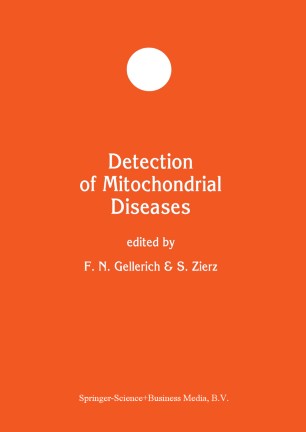 Part of the Developments in Molecular and Cellular Biochemistry book series (DMCB, volume 21)

In October 1995, the 1st Colloquium on Mitochondria and Myopathies in Halle/Saale was organized in Halle/Saale by the editors of this focused issue. The meeting took up what might be called an East German tradition: from 1976 to 1990 Andreas Schmidt organized seven clinically orientated Colloquia on Myology in Jena, and from 1974 to 1990 a series of twelve Colloquia on Mitochondria focused on basic research aspects was arranged by Wolfgang Kunz in Magdeburg. At those meetings, East Germany was a mediator between East European, West European and American scientists. In continuation of this tradition, scientists from more than 17 countries working on mitochondria as neurologists, biochemists, geneticists, or as physiologists came to Halle. The title of the colloquium indicated the combination of both basic and clinical mitochondrial research. The most important contributions of this meeting are now published in this focused issue. We thank all authors for their patience and cooperation that have made it possible to produce this unique collection of papers representing current knowledge on detection of mitochondrial causes of diseases. We especially thank Prof. N.S. Dhalla for making it possible to publish these contributions together in this focused issue and also as a hard-cover book.