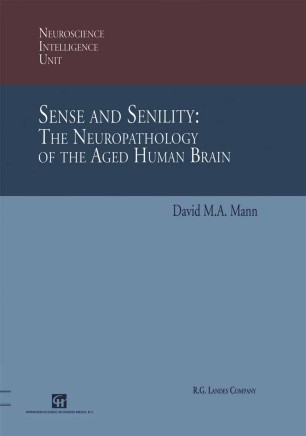 Sense and Senility: The Neuropathology of the Aged Human Brain

nly two things are certain in life, one is that all of us will inevita­ Obly grow older, the other is that at some point during or at the end of this process we shall die. Inherent to the passage of time is a deterio­ ration in the structural and functional integrity of our bodies, this pro­ gressing to such an extent that one or more organ systems will eventu­ ally begin to fail with the continued health and well-being of the individual coming under threat. Age-associated deficiencies in the musculo-skeletal, cardiovascular, or endocrine systems producing arthri­ tis, hypertension, stroke or diabetes are all too apparent in our elderly population yet internally caused failures in the function of the nervous system provide the common, and mostly intractable, problems of memory and intellect or locomotion that face and frustrate clinicians. Perhaps the most important factor which can decide the outcome of research studies professing to examine the effects of the passage of time (i. e. the 'process of aging') on the function of the nervous system, or indeed any other organ system, is the selection of appropriate or repre­ sentative subjects for investigation. The heart of this problem lies in defining what might be considered as 'normal' aging as distinct from age-associated disease; setting the 'goal posts of normality' continues to 1 be a matter of considerable debate.