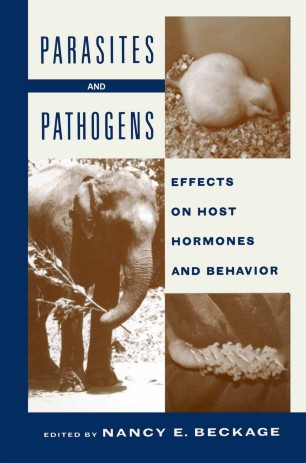 Effects On Host Hormones and Behavior

When Nancy Beckage and I first met in Lynn Riddiford's laboratory at the University of Washington in the mid 1970s, the fields of parasitology, behavior, and endocrinology were thriving and far-flung--disciplines in no serious danger of intersecting. There were rumors that they might have some common ground: Behavioural Aspects of Parasite Transmission (Canning and Wright, 1972) had just emerged, with exciting news not only of the way parasites themselves behave, but also of Machiavellian worms that caused intermediate hosts to shift fundamental responses to light and disturbance, becoming in the process more vulnerable to predation by the next host (Holmes and Bethel, 1972). Meanwhile, biologists such as Miriam Rothschild (see Dedication), G. B. Solomon (1969), and Lynn Riddiford herself (1975) had suggested that the endocrinological rami­ of parasitism might be subtle and pervasive. In general, however, para­ fications sites were viewed as aberrant organisms, perhaps good for a few just-so stories prior to turning our attention once again to real animals. In the decade that followed, Pauline Lawrence (1986a,b), Davy Jones (Jones et al. , 1986), Nancy Beckage (Beckage, 1985; Beckage and Templeton, 1986), and others, including many in this volume, left no doubt that the host-parasite combination in insect systems was physiologically distinct from its unparasitized counterpart in ways that went beyond gross pathology.