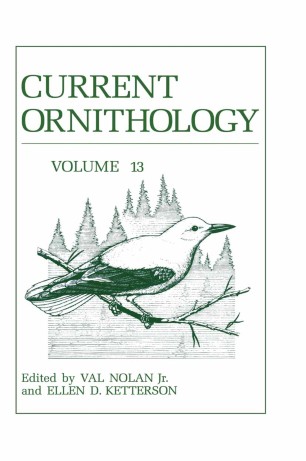 As we assume the editorship of Current Ornithology, it seems useful to review the objectives of the series. We cannot improve on the state­ ments of our predecessors when they began their service as editors. In his preface to Volume 1 (1983), Richard F. Johnston wrote: The appearance of the first volume of a projected series is the occasion for comment on scope, aims, and genesis of the work. The scope of Current Or­ nithology is all of the biology of birds. Ornithology, as a whole-organism sci­ ence, is concerned with birds at every level of biological organization, from the molecular to the community, at least from the Jurassic to the present time, and over every scholarly discipline in which bird biology is done; to say this is merely to expand a dictionary definition of "ornithology. " The aim of the work, to be realized over several volumes, is to present reviews or position statements concerning the active fields of ornithological research. Dennis M. Power, who edited Volumes 6-12 (1989-1995), began his preface to Volume 6 (1989) as follows: This edited series has three principal goals. The first is to provide information in a relatively concise way for researchers needing an overview of specific disciplines. The second is to provide an update on specific schools of thought, bringing together ideas from colleagues whose works often appear in a variety of journals. And the third is to stimul&te and suggest directions for new re­ search.

` The Quality of the individual papers...[is] decidedly above average....I do suggest that university libraries buy this useful series.`
Animal Behavior, 12.
` The discussions provided allow the beginner to quickly come up to speed in specific areas....For more experienced readers they provide new viewpoints, corrections of misconceptions, and a means of checking what we think we already know.`
The Wilson Bulletin, 11.
Buy options