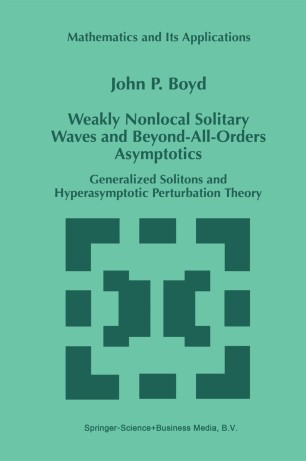 Part of the Mathematics and Its Applications book series (MAIA, volume 442)

" . . . if a physical system is capable of supporting solitary wave motions then such motions will invariably arise from quite general excitations. " - T. Maxworthy (1980), pg. 52. The discover of nonlocal solitary waves is unknown and anonymous, but he or she lived in the dry north of Australia many millenia before the birth of writing. There, on the shores of the Gulf of Carpentaria, vast cylinders of cloud roll from northeast to southwest most mornings. Perhaps 300 meters in diameter, perhaps 500 meters above the ocean, these cylinders of cloud stretch from horizon to horizon. As the cloud evaporates on the trailing edge of the wave and condenses on the leading edge, the cylinder appears to roll backwards even as it propagates inland at perhaps 10-20 meters per second. Often, a whole train of cloud-cylinders propagates from Cape Yorke Penisula across the Gulf towards the southwest across modern Burketown, perhaps as much as 500 km inland into the Northern Territory. Modern-day Australians call it the "Morning Glory". What the discover called it, so many centuries before the invention of hieroglyphics, the foundation of Ur and the coronation of the First Dynasty of China, we do not know. But unless he was very different from us, he felt awe. Physicists (Smith, 1988, and Rottman and Einaudi, 1!:!93) have identified the Morning Glory as a solitary wave.