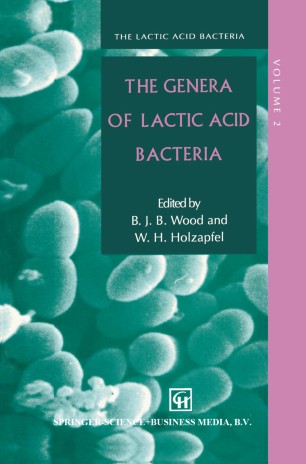 The Genera of Lactic Acid Bacteria

The Lactic Acid Bacteria is planned as a series in a number of volumes, and the interest shown in it appears to justify a cautious optimism that a series comprising at least five volumes will appear in the fullness of time. This being so, I feel that it is desirable to introduce the series by providing a little of the history of the events which culminated in the decision to produce such a series. I also wish to indicate the boundaries of the group 'The Lactic Acid Bacteria' as I have defined them for the present purposes, and to outline my hopes for future topics in the series. Historical background lowe my interest in the lactic acid bacteria (LAB) to the late Dr Cyril Rainbow, who introduced me to their fascinating world when he offered me a place with him to work for a PhD on the carbohydrate metabolism of some lactic rods isolated from English beer breweries by himself and others, notably Dr Dora Kulka. He was particularly interested in their preference for maltose over glucose as a source of carbohydrate for growth, expressed in most cases as a more rapid growth on the disaccharide; but one isolate would grow only on maltose. Eventually we showed that maltose was being utilised by 'direct fermentation' as the older texts called it, specifically by the phosphorolysis which had first been demonstrated for maltose by Doudoroff and his associates in their work on maltose metabolism by a strain of Neisseria meningitidis.