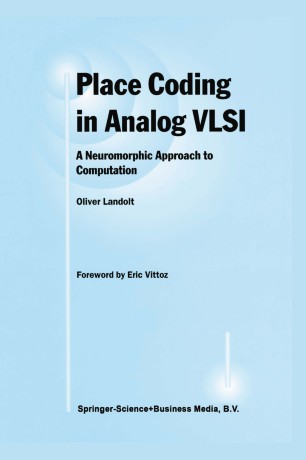 A Neuromorphic Approach to Computation

Neurobiology research suggests that information can be represented by the location of an activity spot in a population of cells (`place coding'), and that this information can be processed by means of networks of interconnections. Place Coding in Analog VLSI defines a representation convention of similar flavor intended for analog-integrated circuit design. It investigates its properties and suggests ways to build circuits on the basis of this coding scheme.
In this electronic version of place coding, numbers are represented by the state of an array of nodes called a map, and computation is carried out by a network of links. In the simplest case, a link is just a wire connecting a node of an input map to a node of an output map. In other cases, a link is an elementary circuit cell. Networks of links are somewhat reminiscent of look-up tables in that they hardwire an arbitrary function of one or several variables. Interestingly, these structures are also related to fuzzy rules, as well as some types of artificial neural networks. The place coding approach provides several substantial benefits over conventional analog design:
The place coding approach is illustrated by three integrated circuits computing non-linear functions of several variables. The simplest one is made up of 80 links and achieves submicrowatt power consumption in continuous operation. The most complex one incorporates about 1800 links for a power consumption of 6 milliwatts, and controls the operation of an active vision system with a moving field of view.
Place Coding in Analog VLSI is primarily intended for researchers and practicing engineers involved in analog and digital hardware design (especially bio-inspired circuits). The book is also a valuable reference for researchers and students in neurobiology, neuroscience, robotics, fuzzy logic and fuzzy control.

`It will interest people who are working with neural networks. ... the book is very concise. I recommend the book, but only for those with previous experience in the field.'
Computing Reviews (April 1999)