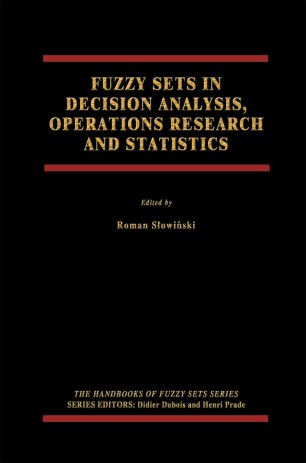 Part of the The Handbooks of Fuzzy Sets Series book series (FSHS, volume 1)

Fuzzy Sets in Decision Analysis, Operations Research and Statistics includes chapters on fuzzy preference modeling, multiple criteria analysis, ranking and sorting methods, group decision-making and fuzzy game theory. It also presents optimization techniques such as fuzzy linear and non-linear programming, applications to graph problems and fuzzy combinatorial methods such as fuzzy dynamic programming. In addition, the book also accounts for advances in fuzzy data analysis, fuzzy statistics, and applications to reliability analysis. These topics are covered within four parts:
The scope and content of the book has resulted from multiple interactions between the editor of the volume, the series editors, the series advisory board, and experts in each chapter area. Each chapter was written by a well-known researcher on the topic and reviewed by other experts in the area. These expert reviewers sometimes became co-authors because of the extent of their contribution to the chapter. As a result, twenty-five authors from twelve countries and four continents were involved in the creation of the 13 chapters, which enhances the international character of the project and gives an idea of how carefully the Handbook has been developed.