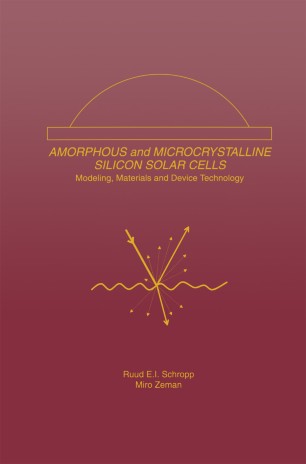 Amorphous silicon solar cell technology has evolved considerably since the first amorphous silicon solar cells were made at RCA Laboratories in 1974. Scien­ tists working in a number of laboratories worldwide have developed improved alloys based on hydrogenated amorphous silicon and microcrystalline silicon. Other scientists have developed new methods for growing these thin films while yet others have developed new photovoltaic (PV) device structures with im­ proved conversion efficiencies. In the last two years, several companies have constructed multi-megawatt manufacturing plants that can produce large-area, multijunction amorphous silicon PV modules. A growing number of people be­ lieve that thin-film photovoltaics will be integrated into buildings on a large scale in the next few decades and will be able to make a major contribution to the world's energy needs. In this book, Ruud E. I. Schropp and Miro Zeman provide an authoritative overview of the current status of thin film solar cells based on amorphous and microcrystalline silicon. They review the significant developments that have occurred during the evolution of the technology and also discuss the most im­ portant recent innovations in the deposition of the materials, the understanding of the physics, and the fabrication and modeling of the devices.