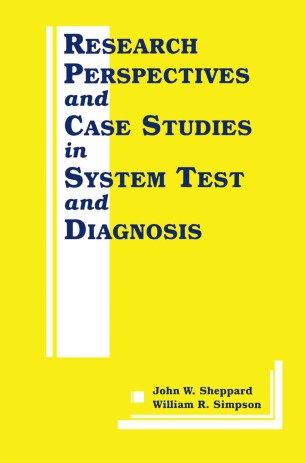 Research Perspectives and Case Studies in System Test and Diagnosis

"System level testing is becoming increasingly important. It is driven by the incessant march of complexity ... which is forcing us to renew our thinking on the processes and procedures that we apply to test and diagnosis of systems. In fact, the complexity defines the system itself which, for our purposes, is ¿any aggregation of related elements that together form an entity of sufficient complexity for which it is impractical to treat all of the elements at the lowest level of detail . System approaches embody the partitioning of problems into smaller inter-related subsystems that will be solved together. Thus, words like hierarchical, dependence, inference, model, and partitioning are frequent throughout this text. Each of the authors deals with the complexity issue in a similar fashion, but the real value in a collected work such as this is in the subtle differences that may lead to synthesized approaches that allow even more progress.
The works included in this volume are an outgrowth of the 2nd International Workshop on System Test and Diagnosis held in Alexandria, Virginia in April 1998. The first such workshop was held in Freiburg, Germany, six years earlier. In the current workshop nearly 50 experts from around the world struggled over issues concerning the subject... In this volume, a select group of workshop participants was invited to provide a chapter that expanded their workshop presentations and incorporated their workshop interactions... While we have attempted to present the work as one volume and requested some revision to the work, the content of the individual chapters was not edited significantly. Consequently, you will see different approaches to solving the same problems and occasional disagreement between authors as to definitions or the importance of factors.
... The works collected in this volume represent the state-of-the-art in system test and diagnosis, and the authors are at the leading edge of that science...”.
From the Preface