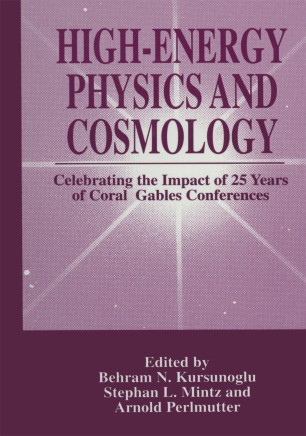 Celebrating the Impact of 25 Years of Coral Gables Conferences

The 25'" Coral Gables Conference was the culmination of the series that was begun in 1964. The conferences evolved under the titles that in~lude: Symmetry Principles at High Energy; Fundamental Interactions; Orbis Scientiae; and, occasionally, Unified Symmetry in the Small and in the Large. There was a pause after the 2()1h meeting in 1983 which was dedicated to P. A. M. Dirac. The conferences were resumed in 1993. Some of the reminiscences involved the absence of great minds who attended these meetings in the past and who were no longer with us. The list includes, just to name a few: Julian Schwinger, Robert Oppenheimer, Lars Onsager, Robert Hofstater, Abdus Salam, Richard Feynman, Stanislov Ulam, P. A. M. Dirac, Lord C. P. Snow, Eugene P. Wigner, Vladimir K. Zworykin, and Dixie Lee Ray. Most of these people were among the architects of modern physics and had participated in many of the early Coral Gables Conferences. We miss them. These conferences have contributed to the progress in high energy physics and cosmology. This year, again, papers were presented on familiar topics, such as neutrino masses, age and total mass of the universe, on the nature of dark matter, and on supersymmetry. The latter has now become a perennial issue. Like the weather, we all talk about it, but, so far cannot do anything to affect it. Another favorite subject was so-called monopoles, which theoretically participate in phenomena like condensation, confinement of electric charge, confinement of monopoles themselves, etc.