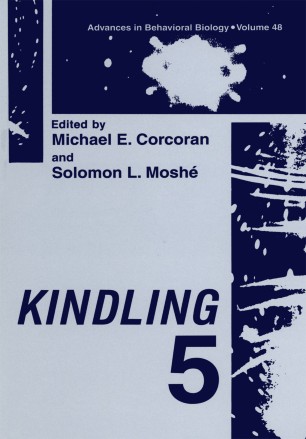 The last Kindling Conference was organized by Dr. Juhn Wada and held at the Univer­ sity of British Columbia, Vancouver, B. C. , in 1989. In the intervening years, research on kin­ dling has proceeded at an explosive pace and significant advances have been made in our understanding of the molecular biological, anatomical, and physiological substrates of kin­ dling, as well as in our appreciation of the age-dependent effects and complex behavioral consequences of kindling, its sensitivity to drugs, and its relevance to the clinical epilepsies. In order to review these developments and to provide researchers with an opportunity to in­ teract face to face and discuss the issues that preoccupy us all, we organized the Fifth Interna­ tional Conference on Kindling, in Victoria, B. C. , in the summer of 1996. Most of the stalwarts in kindling research were invited, as were a number of investigators whose research on kindling has become prominent in the past few years. We continue to miss the late Graham Goddard, the discoverer of kindling, and were saddened by the recent death of Eric Lothman, a prolific researcher and clinician who would have been a prominent participant. We were deeply disturbed to learn of the death of Frank Morrell, one of the earliest kindlers and an eminent neurologist, who died several months after our conference.