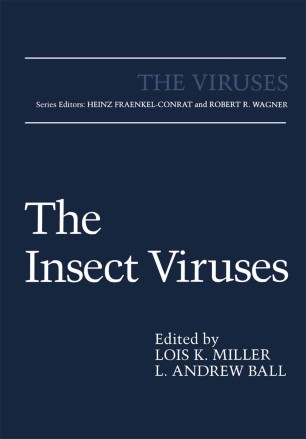 There are over a million different species of insects, and individually they 8 outnumber humans by more than 10 to 1. Moreover, some insects live in close association with both plants and higher animals and naturally exchange viruses with them. It has even been speculated that viruses in general may have radiated through the plant and animal kingdoms from common insect origins. Be that as it may, since insects play pivotal roles in the biosphere, both to the benefit and detriment of mankind, they and the viruses that infect them are important subjects for study. Insects are infected by a diverse medley of viruses, and this volume focuses on those insect virus families that are found primarily or exclusively in insects. All major families of insect-selective viruses are covered except for the baculo­ viruses, which were described in a separate volume of The Viruses series. Included in this volume are the established families of insect viruses, the newly recognized ascovirus family, and the nudiviruses, which probably represent a separate family but currently remain unclassified. The coverage of arboviruses is limited to a single chapter that focuses on their potential utility as vectors and in insect control. Omitted for practical reasons are several individual insect viruses that have been described sporadically in the literature and probably represent novel virus families.

`... represents an excellent, comprehensive reference that occupies a previously unfilled niche in the insect pathology literature. It is a great resource for all researchers who study insect viruses. It is also an extremely valuable source of informatio n for those investigators interested in the use of insect viruses for biological control of insect pests.'
BioScience, 50:4 (2000)
`The Insect Viruses belongs on the shelves of insect pathologists, especially insect virologists, right next to The Baculoviruses. This book will also be useful to researchers in other fields who will appreciate the diversity and utility of these viruses: virologists and students of virology, particularly those interested in virus evolution or structure, entomologists interested in biological control of insects, insect immunity or diseases carried by insect vectors, and biotechnologists immediately spring to mind.'
Trends in Microbiology, 7:11 (1999)
Buy options