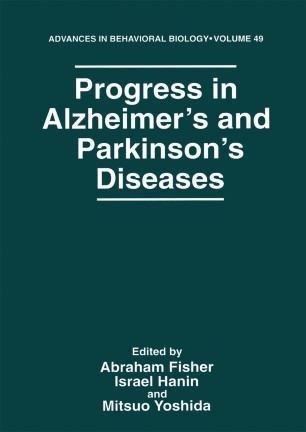 Progress in Alzheimer’s and Parkinson’s Diseases

This book represents the fourth ina series of international conferences related to Alzheimer's (AD) and Parkinson's (PO) diseases. The first one took place in EHat, Israel in 1985; the second in Kyoto, Japan, in 1989; and the third in Chicago, IL, USA in 1993. This book incorporates the proceedings of the Fourth International Conference on Pro­ gress in Alzheimer's and Parkinson's Diseases, held in EHat, Israel, on May 18-23, 1997. This Conference was the 41st in the series of annual OHOLO Conferences sponsored by the Israel Institute for Biological Research (IIBR). It was also conducted under the aus­ pices of the Alzheimer's Association Ronald and Nancy Reagan Research Institute, USA. The Conference was attended by 550 participants from 28 countries, representing a broad spectrum of research interests; and included a well-balanced representation from aca­ demia, clinical institutions and pharmaceutical industry. The four-and-one-half day meeting served as an excellent medium for surveying the current preclinical and clinical develop­ ments in AD, PO, and other related disorders. The scientific program was divided into 24 oral sessions and daily poster sessions. The conference culminated in a round table discus­ sion. There were 122 talks and 161 posters. This book incorporates a combination of both.