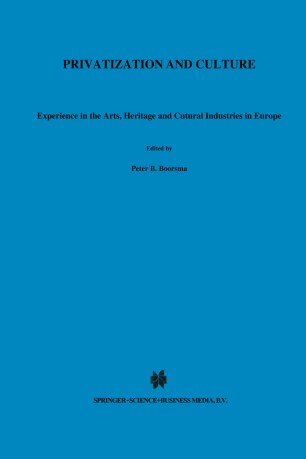 Experiences in the Arts, Heritage and Cultural Industries in Europe

CARlA BODO Board Member of the Cultural Information and Research Centres liaison in Europe (CIRCLE) and Director of the Observatory for the Performing Arts at the Department of the Performing Arts of the Italian Prime Minister's Office, Roma The relation between the public and the private sector in the field of culture, the central theme of this publication, was thoroughly debated during the 1997 CIRCLE Round Table in Amsterdam. It was not the first time CIRCLE addressed this issue. In 1988 CIRCLE'S Bureau was invited to participate in a seminar in Budapest on The State, the Market and Culture. I will never forget the emotional impact of Sacha Rubinstein's demonization of state sup­ port and his apotheosis of the role of the market in the cultural field in Russia. So, in ad­ vance of actual events, we suddenly had a premonition of what was going to happen, ofthe turmoil which was about to radically change the socio-political scene of Central and East­ ern Europe. Six years later, in 1994, we met again in Budapest for a Conference on The Distribu­ tion of Roles between Government and Arts Councils, Associations and Foundations.