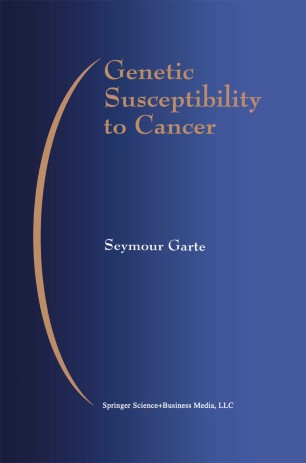 Part of the Developments in Oncology book series (DION, volume 79)

Despite recent progress in many areas of treatment and control, cancer remains a frightening threat to everyone. While scientists have known for decades that the majority of human cancers are caused by environmental agents such as radiation and the chemicals in cigarette smoke, not everyone who smokes gets lung cancer. Furthermore, many people who assiduously avoid all possible risk from smoking, diet, and pollution still succumb to some form of cancer later in life. Does this mean that there is an element of blind chance in the underlying mechanisms of human carcinogenesis? To what extent do genetic influences play a role in determining the cancer risk of individuals?
A number of `cancer families', in which several closely related individuals have suffered from various specific forms of cancer, have been studied by genetic epidemiologists. However, for the majority of cancer cases, little or no discernible genetic influence or family history is found. Recent research has discovered that for many of these `sporadic' (non-familial) cancer cases, defects or aberrations in certain metabolic genes not previously associated with genetic cancer risk may contribute to either causing the disease or at least increasing the chances of developing cancer. It is therefore possible that much of what has previously passed for `bad luck' may turn out to be a new type of `bad genes'.
Genetic Susceptibility to Cancer explains that this new idea of `bad genes' may contain an unexpected positive side. The carcinogenic effects of these metabolic genes, unlike those of the oncogenes and tumor suppressor genes that are responsible for the inherited cancer syndromes, can potentially be overcome or nullified.
Genetic Susceptibility to Cancer will provide a valuable reference for health professionals, researchers, clinicians and biomedical scientists who are interested in the current thinking in this critically important area of cancer management.