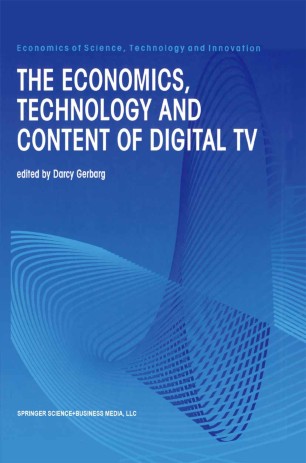 Part of the Economics of Science, Technology and Innovation book series (ESTI, volume 15)

As the world of television moves from analog to digital, political and economic forces are being brought to bear on companies as they attempt to deal with changes occurring in their industries. The impetus for the conversion from analog to digital TV comes from many quarters, including the broadcasting industry, the computer industry, governments, consumer electronics manufacturers, content developers, and the Internet. The widespread acceptance of digital technology in both the home and the workplace account for the ready acceptance of the belief that the move to digital television is an appropriate advancement. Not all authors in this volume however are believers.
This book is divided into four sections each dealing with one aspect of the transition from analog to digital TV broadcasting. The first section presents the various technologies. It establishes a structure for understanding the technologies currently in use as well as those being developed by the industries involved in the delivery of digital television. Section two presents information about consumer TV viewing and includes examples of innovative, experimental interactive programs. Economics and financial issues are addressed from a variety of perspectives in section three. Section four concludes the book with a look at the international environment and the history of digital TV globally.