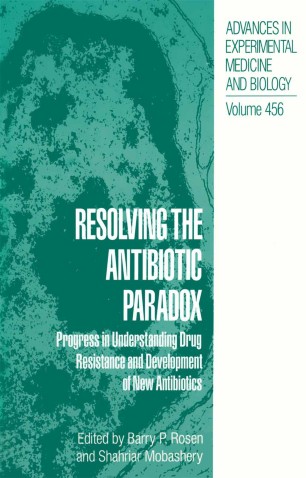 Progress in Understanding Drug Resistance and Development of New Antibiotics

Part of the Advances in Experimental Medicine and Biology book series (AEMB, volume 456)

Antibiotic resistance, once a term appreciated only by microbiologists, has become a common topic in the popular press. Stuart Levy, one of the contributors to this collection, bears some of the responsibility for increasing public awareness with the publication of his book "The Antibiotic Paradox" in 1992: Misuse of antibiotics resulting in increased bacterial resistance had previously been recognized in the infectious disease community. However, Dr. Levy's eloquent public warning about the shrinking efficacy of our antibi­ otic armamentarium served to alert the lay person to the potential consequences of this de­ mise in useful therapy. Because of the proliferation of diverse antibiotic classes with increasing potency and broader activity spectra, it had been assumed that any ordinary bacterial infection could be eradicated with the proper selection of drug. However, it has become evident that we are surrounded by resistant bacteria, many of which were introduced unwittingly into our en­ vironment through the unnecessary use of antibiotics. When it became evident that a number of people were returning for multiple visits to their family physicians for persist­ ent ear infections or non-responsive bronchitis, questions were raised about the antibiotic treatments that were being prescribed. Bacteria resistant to common antibiotic regimens were being isolated more frequently, often as organisms classified as "multi-resistant" with decreased susceptibilities to two or more structural classes of agents. Nosocomial spread of these resistances was aided by the transmission of plasmid-mediated resistance factors between species.