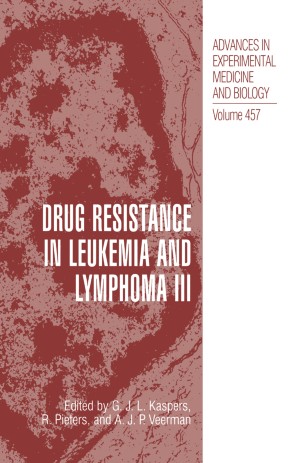 Part of the Advances in Experimental Medicine and Biology book series (AEMB, volume 457)

Cellular drug resistance is a major limitation to the success of chemotherapy of leu­ kemia and lymphoma. The importance of this has now been recognized by both clinicians and scientists. It is of utmost importance to bridge the gap between laboratory and clinic in this field of research. This is the main purpose of the series of International Symposia on Drug Resistance in Leukemia and Lymphoma. These are held every three years in Am­ sterdam, The Netherlands, since 1992. This book contains the proceedings of the third of these meetings, organised in 1998. The book covers all important aspects of drug resistance in leukemia and lymphoma, both in the form of extensive reviews as in manuscripts describing original data. General mechanisms of resistance are discussed, including the drug resistance related proteins p­ glycoprotein, MRP (multi-drug resistance protein) and LRP (lung resistance protein), and the role of glutathione and glutathione-S-transferases. Moreover, more drug type-specific mechanisms of resistance are a topic, such as for glucocorticoids and antifolates. Much in­ formation is provided on apoptosis and its regulators, and on the results of cell culture drug resistance assays. Several papers focus on the modulation or circumvention of drug resistance.