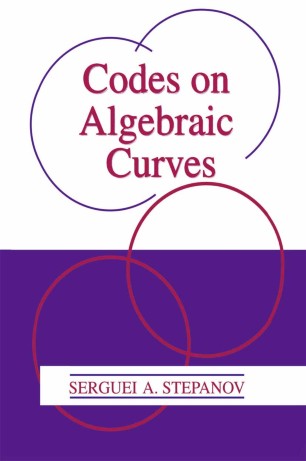 This is a self-contained introduction to algebraic curves over finite fields and geometric Goppa codes. There are four main divisions in the book. The first is a brief exposition of basic concepts and facts of the theory of error-correcting codes (Part I). The second is a complete presentation of the theory of algebraic curves, especially the curves defined over finite fields (Part II). The third is a detailed description of the theory of classical modular curves and their reduction modulo a prime number (Part III). The fourth (and basic) is the construction of geometric Goppa codes and the production of asymptotically good linear codes coming from algebraic curves over finite fields (Part IV). The theory of geometric Goppa codes is a fascinating topic where two extremes meet: the highly abstract and deep theory of algebraic (specifically modular) curves over finite fields and the very concrete problems in the engineering of information transmission. At the present time there are two essentially different ways to produce asymptotically good codes coming from algebraic curves over a finite field with an extremely large number of rational points. The first way, developed by M. A. Tsfasman, S. G. Vladut and Th. Zink [210], is rather difficult and assumes a serious acquaintance with the theory of modular curves and their reduction modulo a prime number. The second way, proposed recently by A.