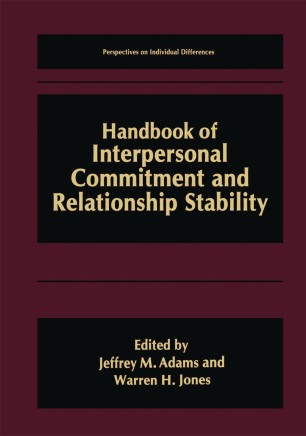 Part of the Perspectives on Individual Differences book series (PIDF)

A fundamental assumption underlying the formation of our most important relationships is that they will persist indefinitely into the future. As an acquaintanceship turns into a friend­ ship, for example, both members of this newly formed interpersonal bond are likely to expect that their interactions will become increasingly frequent, diverse, and intimate over time. This expectation is perhaps most apparent in romantically involved couples who, through a variety of verbal and symbolic means, make explicit pledges to a long-lasting relationship. In either case, it is clear that these relationships represent something valuable to the individuals in­ volved and are pursued with great enthusiasm. Virtually all close relationships are formed within the context of mutually rewarding in­ teractions and/or strong physical attraction between partners. Friends and romantically in­ volved couples alike are drawn to one another because of similarity of attitudes, interests, and personality and, quite simply, because they enjoy one another's company. This enjoyment, cou­ pled with the novelty that characterizes new relationships, almost makes the continuation of the relationship a foregone conclusion. As relationships progress, however, their novelty fades, conflicts may arise between partners, negative life events may occur, and the satisfaction that previously characterized the relationships may diminish.