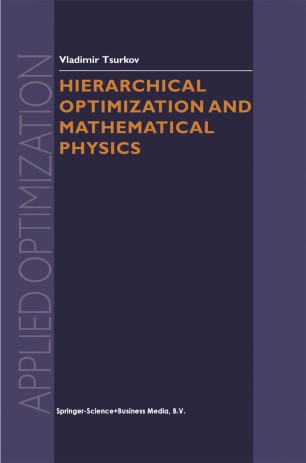 This book should be considered as an introduction to a special dass of hierarchical systems of optimal control, where subsystems are described by partial differential equations of various types. Optimization is carried out by means of a two-level scheme, where the center optimizes coordination for the upper level and subsystems find the optimal solutions for independent local problems. The main algorithm is a method of iterative aggregation. The coordinator solves the problern with macrovariables, whose number is less than the number of initial variables. This problern is often very simple. On the lower level, we have the usual optimal control problems of math­ ematical physics, which are far simpler than the initial statements. Thus, the decomposition (or reduction to problems ofless dimensions) is obtained. The algorithm constructs a sequence of so-called disaggregated solutions that are feasible for the main problern and converge to its optimal solutionunder certain assumptions ( e.g., under strict convexity of the input functions). Thus, we bridge the gap between two disciplines: optimization theory of large-scale systems and mathematical physics. The first motivation was a special model of branch planning, where the final product obeys a preset assortment relation. The ratio coefficient is maximized. Constraints are given in the form of linear inequalities with block diagonal structure of the part of a matrix that corresponds to subsystems. The central coordinator assem­ bles the final production from the components produced by the subsystems.