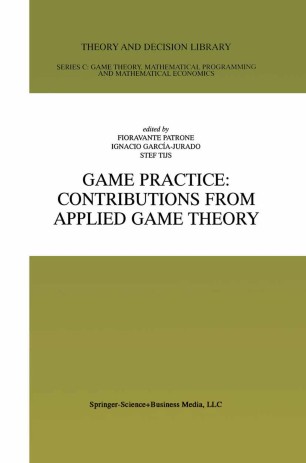 This collection of papers is an outgrowth of the "Game Practice I" th th conference held in Genoa from 28 to 30 June 1998. More precisely, it is the result of the call for papers that was issued in association with that conference: actually, nearly half of the contributions to this book are papers that were presented in Genoa. The name chosen for the conference and for this book is in evident and provocative contrast with "Game Theory": this choice needs some explanation, and to that we shall devote a few words of this Preface. Let us say at the outset that "Game Practice" would not exist without Game Theory. As one can see, the overall content of this book is firmly rooted in the existing Game Theory. It could be hardly otherwise, given the success and influence of Game Theory (just think of the basic issues in Economic Theory), and the tremendous development that has taken place within Game Theory. This success, however, makes even more evident the existence of problems with respect to the verification of the theory. This is patent from the point of view of the predictive value of Game Theory (the "positive" side): a lot of experimental and observational evidence demon­ strates that there is a large gap between theory and "practice".