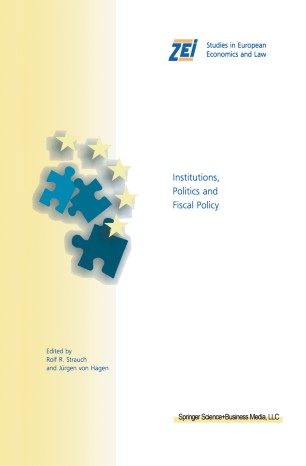 Rolf R. Strauch and Jiirgen von Hagen Center for European Integration Studies (ZEI), University of Bonn; ZEI, University of Bonn, Indiana University, and CEPR The large and persistent deficits, rising levels of debt and growing levels of public spending observed in many DECO economies during the past 25 years have stimulated much theoretical and empirical research on the political economy of public finance. Although a number of issues have been studied extensively, certain areas are still at an exploratory stage and need further theorizing and thorough empirical research. During the last two decades, the theoretical debate on budgeting has been dominated by the controversy between partisan and institutionalist approaches. Within the more political-science oriented, institutionalist literature, a controversy exists between the distributive and the informational perspectives, each setting forth a distinctive organizational rationale of parliaments with different fiscal implications. The papers in this volume cover these different perspectives, extend previous models, and test their empirical validity. The papers were originally written for a conference on "Institutions, Politics, and Fiscal Policy" organized by the Center for European Integration Studies at the University of Bonn, Germany, in July 1998. The book is organized in three parts each focusing on a distinctive aspect. The first part is dedicated to the partisan perspective. The second part focuses on budget institutions. The third part consists of three case studies of institutional reform of the budget process. This book is directed to academics and practitioners alike.