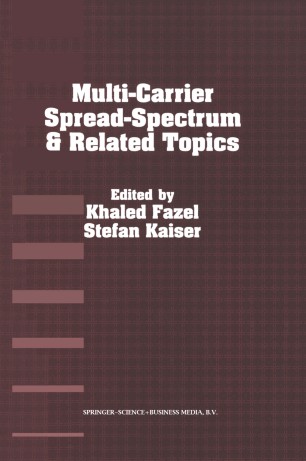 Khaled Fazel Stefan Kaiser Digital Microwave Systems German Aerospace Center (DLR) Bosch Telecom GmbH Institute for Communications Technology D-71522 Backnang, Germany D-82234 Wessling, Germany In this last decade of this millennium the technique of multi-carrier transmission for wireless broadband multimedia applications has been receiving wide interests. Its first great success was in 1990 as it was selected in the European Digital Audio Broadcasting (DAB) standard. Its further prominent successes were in 1995 and 1998 as it was selected as modulation scheme in the European Digital Video Broadcasting (DVB-T) and in three broadband wireless indoor standards, namely ETSI-Hiperlan-II, American IEEE-802. 11 and Japanese MMAC, respectively. The benefits and success of multi-carrier (MC) modulation in one side and the flexibility offered by spread spectrum (SS) technique in other hand motivated many researchers to investigate the combination of both techniques, known as multi-carrier spread-spectrum (MC-SS). This combination benefits from the main advantages of both systems and offers high flexibility, high spectral efficiency, simple detection strategies, narrow­ band interference rejection capability, etc. . The basic principle of this combination is straightforward: The spreading is performed as direct SS (DS-SS) but instead of transmitting the chips over a single sequence carrier, several sub-carriers could be employed. As depicted in Figure 1, after spreading with assigned user specific code of processing gain G the frequency mapping and multi-carrier modulation is applied. In the receiver side after multi-carrier demodulation and frequency de-mapping, the corresponding detection algorithm will be performed.