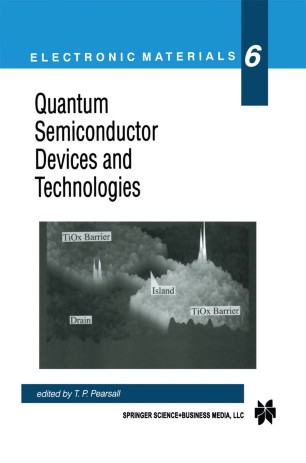 stacked QD structure and is useful for examining the possibility of all­ optical measurement of stacked QD layers. Optical absorption spectra of self-assembled QDs has been little reported, and further investigation in necessary to study hole-burning memory. 2.5 Summary This chapter describes recent advances in quantum dot fabrication tech­ nologies, focusing on our self-formed quantum dot technologies including TSR quantum dots and SK-mode self-assembled quantum dots. As is described in this chapter, there are many possible device applications such as quantum dot tunneling memory devices, quantum dot fioating-dot gate FETs, quantum dot lasers, and quantum dot hole-burning memory devices. The quantum dot laser applications seem to be the most practicable among these applications. However, many problems remain to be solved before even this application becomes practical. The most important issue is to of self-assembled quantum dots more pre­ control the size and position cisely, with an accuracy on an atomic scale. The confinement must be enough to keep the separation energy between quantized energy levels high enough to get high-temperature characteristics. The lasing oscillation frequency should be fixed at 1.3 f.lITl or 1.5 f.lITl for optical communication. Phonon bottleneck problems should be solved by the optimization of device structures. Fortunately, there is much activity in the area of quantum dot lasers and, therefore, many breakthroughs will be made, along with the exploration of other new application areas.