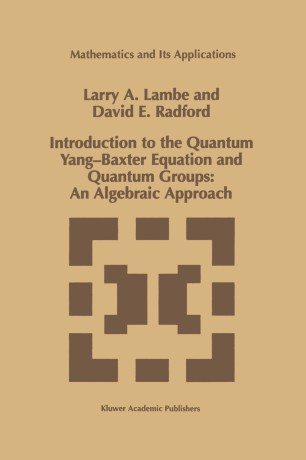 Introduction to the Quantum Yang-Baxter Equation and Quantum Groups: An Algebraic Approach

Part of the Mathematics and Its Applications book series (MAIA, volume 423)

Chapter 1 The algebraic prerequisites for the book are covered here and in the appendix. This chapter should be used as reference material and should be consulted as needed. A systematic treatment of algebras, coalgebras, bialgebras, Hopf algebras, and represen­ tations of these objects to the extent needed for the book is given. The material here not specifically cited can be found for the most part in [Sweedler, 1969] in one form or another, with a few exceptions. A great deal of emphasis is placed on the coalgebra which is the dual of n x n matrices over a field. This is the most basic example of a coalgebra for our purposes and is at the heart of most algebraic constructions described in this book. We have found pointed bialgebras useful in connection with solving the quantum Yang-Baxter equation. For this reason we develop their theory in some detail. The class of examples described in Chapter 6 in connection with the quantum double consists of pointed Hopf algebras. We note the quantized enveloping algebras described Hopf algebras. Thus for many reasons pointed bialgebras are elsewhere are pointed of fundamental interest in the study of the quantum Yang-Baxter equation and objects quantum groups.