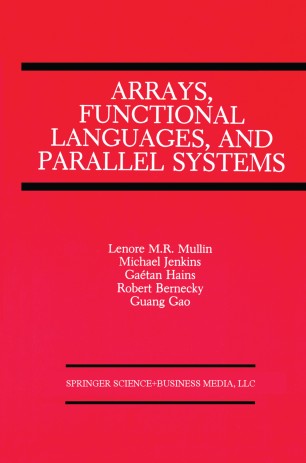 During a meeting in Toronto last winter, Mike Jenkins, Bob Bernecky and I were discussing how the two existing theories on arrays influenced or were in­ fluenced by programming languages and systems. More's Army Theory was the basis for NIAL and APL2 and Mullin's A Mathematics of A rmys(MOA) , is being used as an algebra of arrays in functional and A-calculus based pro­ gramming languages. MOA was influenced by Iverson's initial and extended algebra, the foundations for APL and J respectively. We discussed that there is a lot of interest in the Computer Science and Engineering communities concerning formal methods for languages that could support massively parallel operations in scientific computing, a back­ to-roots interest for both Mike and myself. Languages for this domain can no longer be informally developed since it is necessary to map languages easily to many multiprocessor architectures. Software systems intended for parallel computation require a formal basis so that modifications can be done with relative ease while ensuring integrity in design. List based lan­ guages are profiting from theoretical foundations such as the Bird-Meertens formalism. Their theory has been successfully used to describe list based parallel algorithms across many classes of architectures.