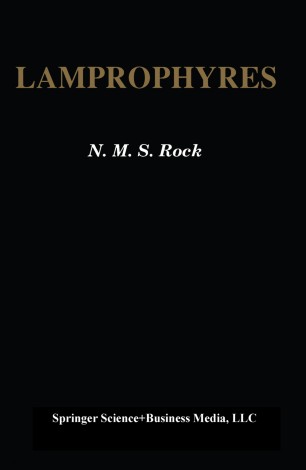 Following their recognition by Gumbel (1874), lamprophyres were treated for an entire century as little more than obscure curiosities. Although this situation has changed recently, with a flowering of publications and active workers, lamprophyres remain almost the only group of igneous rocks which have not yet received attention in a dedicated monograph. In five exploratory reviews (1977-1987), the writer aimed to set out what was known about these rocks. The lUGS Subcommission on igneous rock systematics had meanwhile presented its nomenclatural framework (Streckeisen 1979). All this has now been overtaken by a recent explosion of interest, epitomized not least by lamprophyres' greater prominence in the 4th International Kimberlite Conference Proceedings. More data have become available since 1985 than over the entire previous century, and it is obviously impossible for such an extraordinary outpouring to be fully reviewed in this first, preliminary book. At the risk of dissatisfying some readers, therefore, this book concentrates on factual matters, and on a broad overview rather than minutiae. Because not even a world map of known lamprophyres was previously available, almost half the book is deliberately taken up by the first global lamprophyre compilation, and its commensurately extensive Bibliography. Such a compendium of largely objective information is believed to be of more immediate interest and lasting value than a premature pottage of petrogenetic polemic. Chapters 1-7 bring previous studies up to date, and concentrate on factual information.