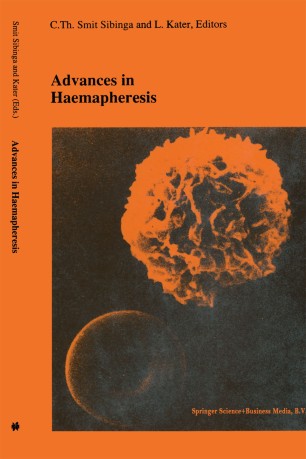 Proceedings of the Third International Congress of the World Apheresis Association. April 9–12,1990, Amsterdam, The Netherlands

Part of the Developments in Hematology and Immunology book series (DIHI, volume 25)

The first International Meeting on Apheresis was held in Dyon in 1984. At the congress it became clear that both the technical and therapeutic sides developed very rapidly and it appeared fruitful to bring together the investigators of the different countries working in the areas. At that time immunology had come to pervade many clinical specialities, and hemapheresis, especially plasmapheresis was considered a therapeutic tool in many immunological diseases which hitherto had proved to be fatal. New methods to identify certain antibodies and circulating immune complexes in the serum and the possibilities to remove them from the blood by several techniques (filtration, centrifugation, immunoabsorp­ tion) led to an almost uncontrolled use of plasma exchange in a variety of diseases. Since then the technical possibilities of this technique were further recognized, as was the impact of immunology on many diseases, and the possibilities to collect specific components for therapeutic pur­ poses. But also we became aware of the limited contributions of anec­ dotal data on successes or failures of apheresis as adjuvant treatment. Therefore international prospective studies were initiated to make critical assessment possible of apheresis in various diseases.