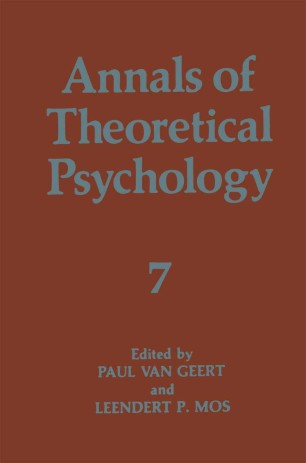 This is the first of a two-volume work in the Annals series devoted to developmental psychology. The project was originally conceived in 1985 when Paul van Geert, who had just completed his Theory building in developmental psychology (North Holland, 1986), agreed to col­ laborate on anAnnals volume examining foundational issues pertaining to the concept of development. The project attracted considerable interest and, in view of the length of the resulting manuscript, a decision was made to publish it in two volumes. Fortunately, the contributors provided coherent perspectives on two relatively distinct developmen­ tal themes which served to facilitate our task of dividing their contribu­ tions into two volumes. The first volume deals with the foundations of developmental theory and methodology; the second volume -to appear as Volume 8 of the Annals -with theoretical issues in developmental psychology. In this first volume, the contributions by Willis Overton and Joachim Wohlwill were completed in 1988, those by Roger Dixon, Richard Lerner, and David Hultsch, and Paul van Geert in 1989. Commentaries followed quickly and replies to commentaries were completed in 1990. Paul van Geert provides a general framework within which the founda­ tional issues of development are discussed. He is especially concerned with the nature of transition models and the structure of time in developmental theory. The relationship between methods and framework, or theory, is the topic of Joachim Wohlwill's contribution.