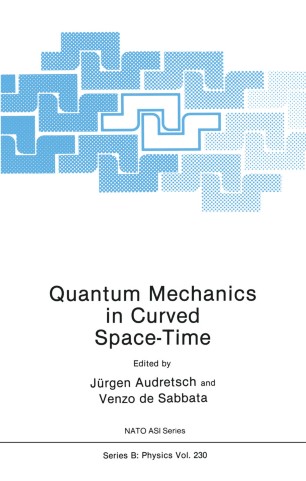 Quantum mechanics and quantum field theory on one hand and Gravity as a theory of curved space-time on the other are the two great conc- tual schemes of modern theoretical physics. For many decades they have lived peacefully together for a simple reason: it was a coexistence wi- out much interaction. There has been the family of relativists and the other family of elementary particle physicists and both sides have been convinced that their problems have not very much to do with the problems of the respective other side. This was a situation which could not last forever, because the two theoretical schemes have a particular structural trait in common: their claim for totality and universality. Namely on one hand all physical theories have to be formulated in a quantum mechanical manner, and on the other hand gravity as curved space-time influences all processes and vice versa. It was therefore only a question of time that physically relevant domains of application would attract a general int- est, which demand a combined application of both theoretical schemes. But it is immediately obvious that such an application of both schemes is - possible if the schemes are taken as they are. Something new is needed which reconciles gravity and quantum mechanics. During the last two de- des we are now doing the first steps towards this more general theory and we are confronted with fundamental difficulties.