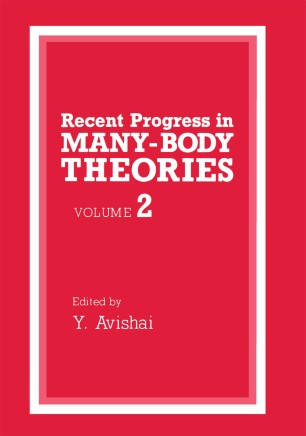 The present volume contains the texts of the invited talks delivered at the Sixth International Conference on Recent Progress in Many-Body Theories held in Arad, Israel during the period November 5-10 1989. The host institute was the Physics Department at the Ben Gurion University of the Negev. Beside the invited talks there have been also two poster sessions. The general format and style of the meeting followed closely those which had preceded it and evolved from the earlier conferences in the series: Trieste 1978, Oxtapec 1981, Altenberg 1983, San Francisco 1985 and Oulu 1987. The conferences in this series are intended to cover the broad spectrum of modem physics related to the many body problem. It starts on the smallest length scales in dealing with quark gluon plasmas and ends on the largest length scales in tackling many body problems in astrophysics. In between, it is concerned with nuclear physics, solid state physics, statistical mechanics, field theory, molecular dynamics, hydrodynamics, chaos, etc. Like in the Oulu conference, special emphasis has been put on recent developments in high Tc superconductivity. Beside the half day session devoted to it we have also organized an evening round table discussion on the future of the whole subject. Furthermore, a new, and in the opinion of the editor a very refreshing element which was absent in earlier conferences was the presentation of a few talks by experimentalists.