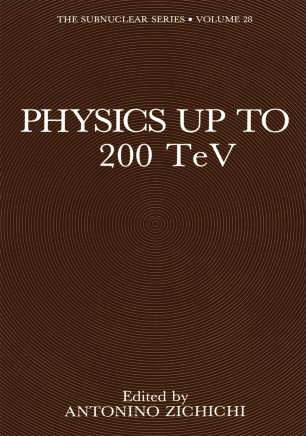 Part of the The Subnuclear Series book series (SUS, volume 28)

During July 1990. a group of 83 physicists from 43 laboratories in 21 countries met in Erice for the 28th Course of the International School of Subnuclear Physics. The countries represented were: Algeria. Canada. Chile. China. Czechoslovakia. Denmark. France. the Federal Republic of Germany. Greece. Holland. India. Italy. Pakistan. Peru. Poland. Sweden. Switzerland. Turkey. the Union of Soviet Socialist Republics. the United Kingdom. and the United States of America. The School was sponsored by the European Physical Society (EPS). the Italian Ministry of Education (MPI). the Italian Ministry of University and Scientific Research. the Sicilian Regional Government (ERS). and the Weizmann Institute of Science. The new topic discussed in some detail at the School was QCD phenomenology at 200 TeV. This energy frontier represents the goal for subnuclear physics after LHC and sse. The main lecturers were T.D. Lee. L. Cifarelli. Y. Dokshitzer and A. Ringwald. There are two possibilities. one optimistic. the other pessimistic. LHC and SSC can produce remarkable discoveries. In this case. the need to go to higher energies will be obvious. In the pessimistic case. LHC and SSC will produce the strongest evidence for the validity of the Standard Model. The need for higher energies will be impelled. In neither case can we wait. If the 200 TeV frontier is to be reached within our lifetime we need to start now: thinking and preparing the tools. Theory and R&D for future detectors are the basic points of the 200 TeV frontier.