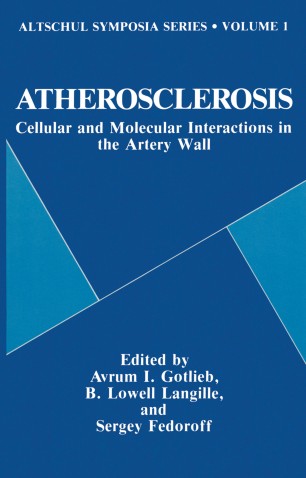 Cellular and Molecular Interactions in the Artery Wall

This volume contains the papers which were presented at the First Altschul Symposium, Atherosclerosis: Cellular and Molecular Interactions in the Artery Wall. The symposium was held in Saskatoon, at the University of Saskatchewan in May 1990 in memory of Dr. Rudolph Altschul, a pioneer in the field of vascular biology and the prevention of atherosclerosis. Dr. Altschul was Professor and Head of the Department of Anatomy at the University of Saskatchewan from 1955 to 1963. The challenge for biomedical scientists is to unravel the multifactorial etiology of atherosclerosis. For the last hundred and sixty years, anatomical pathologists have carefully studied the morphological changes of the human vascular wall during the initiation and evolution of the fibrofatty atherosclerotic plaque. Based on these elegant morphological observations, theories on atherogenesis were put forth by pathologists in the 1840's. Rudolf Virchow suggested that the movement of substances from the blood into the vessel wall was important for atherogenesis while Carl von Rokitansky felt that the deposition of substances on the lumenal surface of the artery resulted in the formation of atherosclerotic plaque. Since these original theories, it has become apparent that the pathogenesis of atherosclerosis is multifactorial and the disease evolves in stages. It is also likely that not all plaques arise through the same sequence of events and that many steps are involved in the development of each plaque. Today, our understanding of the complicated processes of atherogenesis is still incomplete.