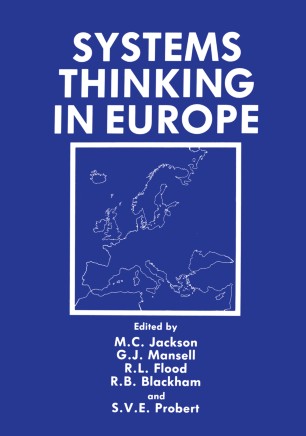 The theme ofthe conference at which the papers in this book were presented was'Systems Thinking in Europe'. Members of the United Kingdom Systems Society (UKSS) were conscious that the systems movementflourishes notonly in the UK, America and the Antipodes, but also in continental Europe, both East and West, and in the USSR, a nation increasingly being welcomed by the European comity. Membership of the UKSS had not perhaps had the opportunity, however, of hearing important new ideas from continental Europe, and this conference provided an opportunity to do so. Some interesting papers are to be found here from both the West and the East, if the editors may be forgiven for perpetuating what may be an increasingly irrelevant dichotomy. One lesson to be learned from this conference, though, is that systems thinking is truly international. This is not to say that there is one systems paradigm unifonnly applied, however. Perhaps the core of systems thinking is that one is interested in complex 'wholes' with emergent properties, to which cybernetic ideas can be applied. Examples of such systems thinking can be found in these proceedings, for example in the section entitled "Applications of Systems Thinking". Attempts to bring about change with these ideas, however, have given rise to a diversity of approaches, as is evidenced by the papers dealing with the application of methodologies in the 'hard' and 'soft' systems traditions.