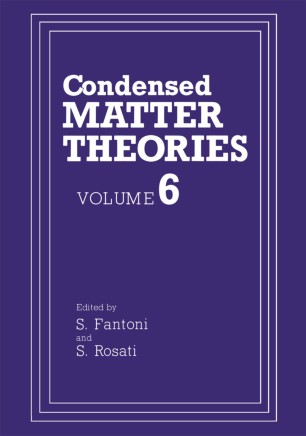 The XIV International Workshop on Condensed Matter Theories has been held at the Elba International Physics Center (EIPC), Marciana Marina, Isola d'Elba, Italy, from 18-23 June, 1990. The Workshop started in 1977 in Sao Paolo, Brazil, as the 1st Pan American Workshop on Condensed Matter Theories, with the purpose of bringing together scientists from the Western countries, working in many different topics of Condensed Matter Theories, to facilitate exchanges of ideas and technologies from different areas as well as collaborations among the scientists. The next five Workshops were held at Trieste, Italy (1978), in Buenos Aires, Argentina ( 1979), in Caracas, Venezuela (1980), in Mexico City, Mexico (1981) and in St. Louis, Missouri, U. S. A. (1982). Given the international dimension reached by the Workshop, it was decided to extend it into an International Workshop, which was held for the first time in Altenberg, Germany (1983). The next editions took place in Granada, Spain (1984), San Francisco, California, U. S. A. (1985), Argonne, Illinois, U. S. A. (1986), Oulu, Finland (1987), Taxco, Mexico (1988) and Campos do Jordao, Brasil (1989). Many scientists have contributed to the development of the various editions of the Work­ shop. However, a particular mention has to be made to Profs. Manuel de Llano and Angel Plastino who initially proposed the Workshop and carried it forward, and to Prof. J . W. Clark, whose efforts have been of immense help to its recent developments.