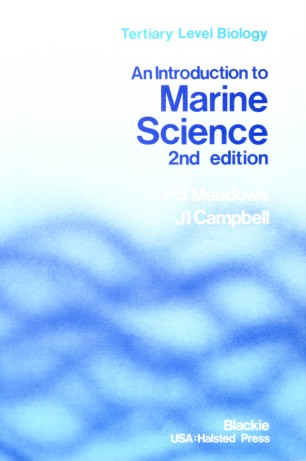 An Introduction to Marine Science

It is now nine years since the first edition appeared and much has changed in marine science during that time. For example, satellites are now routinely used in remote sensing of the ocean surface and hydrothermal vents at sea floor spreading centres have been extensively researched. The second edition has been considerably expanded and reorganised, and many new figures and tables have been included. Every chapter has been carefully updated and many have been rewritten. A new chapter on man's use of the oceans has been included to cover satellites and position fixing, renewable energy sources in the sea, seabed minerals, oil and gas, pollution and maritime law. In this edition we have also referred to a number of original references and review articles so that readers can find their way into the literature more easily. As in the first edition, PSM has been mainly responsible for the text and lIC for the illustrations, although each has responded to advice from the other and also from many colleagues. In this context readers should note that the illustrations form an integral and major part of the book. The text will almost certainly be too concise for many readers if they do not study the illustrations carefully at the same time. The book has been written as an introductory text for students, although it can serve anyone who is beginning a study of the sea.