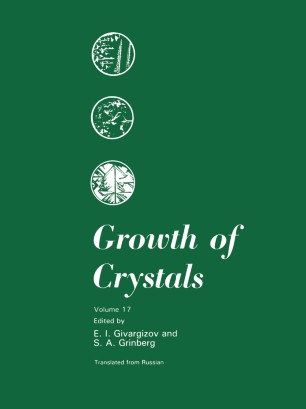 Part of the Growth of Crystals book series (GROC, volume 17)

This volume, as the previous ones, consists primarily of review artic1es. However, it also contains a large quantity of original material on the growth of crystals and films. Priority is given to experimental work. Only two artic1es are concerned exc1usively with the theory of crystal growth. Theoretical aspects are treated in several others. This volume is divided into three parts. Part I, "Epitaxy and Transformations in Thin Films," stems from the current broad application of lasers and optical effects in general to crystal growth (in particular, the growth of thin films). The first three artic1es of the book are devoted to this topic. In particular, the laser pulse vaporization method, for which a comparatively slow deposition rate is typical (which should not always be viewed as a drawback), is distinguished by the unique kinetics of the initial growth stages. These are not entirely explained. However, this method is completely suitable for oriented or generally ordered growth of films under otherwise equal conditions. Another artic1e of this section is based on use of ultrashort (down to picosecond) laser pulses. It emphasizes the nonequilibrium processes of crystallization and decrystallization that are characteristic for such influences. In particular, material heated above its melting point and metastable states in the semiconductor melt exhibit these qualities.