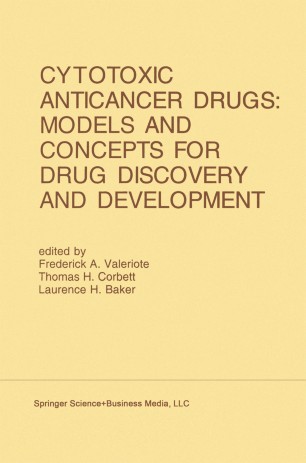 Part of the Developments in Oncology book series (DION, volume 68)

The focus of the 22nd Annual Detroit Cancer Symposium was the presentation and discussion of cytotoxic agents, with a significant portion of the symposium including the exciting frontiers of drug discovery being explored by the National Cooperative Drug Discovery Groups (NCDDG) Program. The symposium brought together a large number of investigators from government, universities and pharmaceutical companies involved in the discovery and development of new anticancer agents. Exciting new leads were presented and the status of others presently under development was discussed.
Of particular significance has been the initiation of renewed efforts in the area of natural product drug discovery, where the discovery of new cytotoxics is very promising at the moment. A number of major changes have occurred during the last decade in research on drug discovery of cytotoxic agents. Critical reviews of a number of the models and concepts underlying drug discovery represented a continuous thread throughout the meeting, being constantly discussed in terms of their advantages, disadvantages and capabilities of discovering solid tumor active anticancer agents.
A recent development which is to be much applauded and which portends to great discoveries is the new relationship formed between Government, University of Industry. The NCDDG mechanism which stimulates this interaction is an inexpensive manner to greatly magnify the drug discovery and development effort nationally. Cytotoxic Anticancer Drugs: Models and Concepts for Drug Discovery and Development represents a forum which will become the major mode for bringing together these three different components in the equation to regularly discuss new results and ideas.