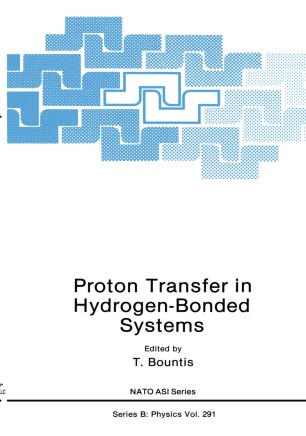 Charge transport through the transfer of protons between molecules has long been recognized as a fundamental process, which plays an important role in many chemical reactions. In particular, proton transfer through Hydrogen (H-) bonds has been identified as the main mechanism, via which many bio­ logical functions are performed and many properties of such basic substances as proteins and ice can be understood. In this volume, several of these important aspects of the H-bond are rep­ resented. As the division in different sections already indicates, present day research in proton teansfer in biochemistry, biology, and the physics of water and ice remains highly active and very exciting. Nearly a decade ago, a novel approach to the study of collective proton motion in H-bonded systems was proposed, in which this phenomenon was explained by the propagation of certain coherent structures called solitons. In the years that followed, the approach ofsoliton dynamics was further extended and developed by many researchers around the world, into a legitimate and useful method for the analysis of proton transfer in H-bonded systems. Dr. Stephanos Pnevmatikos, the original Director of this ARW, was one of the pioneers in the application ofsoliton ideas to the study ofcharge transport through H-bonds. Having used similar concepts himself in his research on 2D lattices) he was convinced energy transfer through molecular chains (and that solitons can play an important role in enhancing our understanding of protonic conductivity.