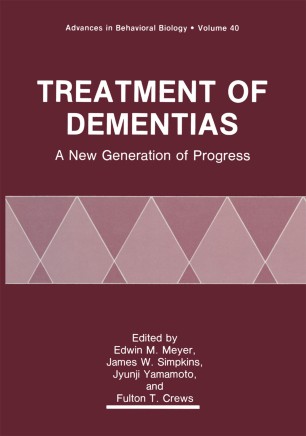 A New Generation of Progress

Alzheimer's disease is one the foremost health problems facing every society fortunate enough to attain a level of medical care that ensures an average lifespan of over 70 years of age. The cause of the disease remains unknown, and no single therapeutic approach has yet been found highly efficacious. Indeed, as the complexity of its effects on brain neuronal systems becomes elucidated, the concept emerges that Alzheimer's disease may be an umbrella term for multiple Alzheimer's-type syndromes that can be differentiated based on etiology (hereditary versus sporadic), neurochemical deficits, and extent of pathology. Whether one or more disease processes is involved, it seems increasingly unlikely that any single drug will provide efficacious relief across the broad spectrum of symptoms reflected in large subject populations. Rational therapeutic approaches may yield long term amelioration of many symptoms in selected groups of patients; and individual symptoms may be ameliorated in larger populations. Multiple approaches may be combined to optimize therapeutic effects. For example, a variety of approaches remain focused on restoration of cholinergic neurodegeneration and enhancing cholinergic neurotransmission, whereas other approaches attempt to retard the of the brain that occurs during Alzheimer's disease. Chapters cover continuous degeneration topics from growth factor secretion of proteases, which could modify amyloid processing, to neuronal gene delivery using viral vectors. The breadth and thoroughness of the chapters truly embrace a broad spectrurn of models, pathological mechanisms and therapeutic approaches.